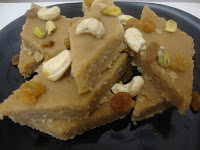 1. In a heavy bottomed pan, fry the wheat flour on low heat with the butter/ghee.
2. Keep stirring the mixture continuously to ensure no lumps. Continue frying till the mixture slightly browns the nuts crisp to golden brown.
3. In the meantime, bring the milk and sugar to a boil and simmer for 3 minutes. Mix in the hot mixture to the cooked flour, in small amounts, till the whole syrup gets absorbed. Swirl the mixture continuously and make sure there are no lumps in the halwa.
4. Take away from heat and let it sit covered for 10-15 minutes; the flour will absorb the mixture and cook in it in this time imbibing the creaminess of the milk and the melted sugar.
5. Remove the lid and swirl the halwa a little more. Serve the halwa with additional ghee if desired.

Tip:
1. Sprinkle a teaspoon of ground cinnamon over the halwa to give it a dash of spice
2. If you want to make the Turkish version, take out spoonfuls of halwa (after the resting time) and make into simple shapes. Let cool and serve at room temperature.
Posted by Manaswini at 12:38 AM