Rich in history and natural beauty, Kerala is a jewel on the shore of the Arabian Sea, Aviyal is one of the specialities of this breathtaking region. Fresh vegetables, flavourful spices, and coconut are common ingredients in the dishes made along India's Spice Coast. 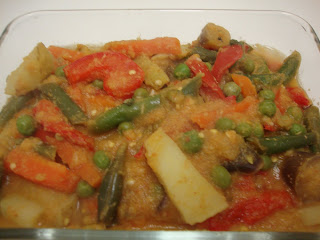 1. Grind to paste the tomatoes, onion, cumin, 1/2 tsp cayenne pepper, 1/8 tsp turmeric, coconut with 1/2 cup water in a blender until you have a smooth paste.
2. Cut the potatoes into 1" inch thick slices, and then cut them lengthwise into thin matchsticks or strips about 1/2 inch wide. Cut the matchsticks crosswise into sections 2 inches long. Measure 1 cup and place in a large bowl of cold water.
3. Cut the carrots into matchsticks the same size as potatoes. Measure one cup and add to the potatoes. Cut the beans into 1 1/2 inch long sections and add to the bowl.
4. Cut the bell pepper in half, remove the seeds and then cut the halves into strips 1/2 inch wide and 1 1/2 inch long. Add the bell peppers to the bowl.
5. Wash the eggplant, cut into 1-inch thick slices, and add to he bowl. If using fresh peas, add to the other vegetables now. If using frozen peas, place them in a separate bowl to be added later.
6. Cut the peppers in half, remove the seeds, and slice the peppers in half lengthwise, cut them into strips, chop them into small pieces, and add to the vegetables. Rinse, and drain the vegetables.
7. Place all the vegetables except the frozen peas in a large pot. Add the salt, remaining turmeric, remaining cayenne pepper, and remaining water. Toss gently with a spoon, to evenly coat all the ingredients.
8. Bring he pot to a boil over high heat. Once it boils, set the lid slightly ajar, lower the heat to medium-low, and boil for 5 minutes.
9. After 5 minutes, add the frozen peas, if you are using them Add the coconut paste and gently toss all the ingredients together with a spoon. Reduce the heat to simmer, place the lid slightly ajar on the pot, and simmer he vegetables for 1 minutes or until tender and cooked through.
10. If the sauce is too thick to simmer as they cook, add more water , but not more than 1/4 cup.

Spoon the finished stew onto a serving platter and serve hot. This recipe may be made ahead of time and reheated when ready to serve.
Posted by Manaswini at 2:47 PM