Few dishes are as visually and nutritionally well-balanced and appetizingly fragrant as bunchi khichari. Here is a main dish you can always count on for a warm reception. On the one hand, it is a full meal accompanied only by a tossed salad. On the other hand it fits into numerous larger menus, such as summer or fall holiday fare. 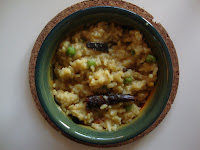 
1. Clean, wash, drain and soak the rice in warm water for about 10 minutes.
2. Combine the split moong dal, rice, and turmeric in a bowl sprinkle in about 1 tsp of water and stir until the mixture is coated with the turmeric.
3. Heat the ghee or oil-butter mixture in a heavy non-stick pan or directly in the pressure cooker over moderate heat. One after another, separately fry the cashew nuts, almonds, coconut and raisins until they each become golden brown. As the batches brown, remove with a slotted spoon and transfer to paper towels to drain. Mix well.
4. Increase the heat to moderately high, add the cinnamon stick, cloves, cumin seeds, red chillies and sweetener and fry until the cumin seeds darken and sweetener caramelizes and turns rich reddish-brown.
5. Drop in the asafoetida stir in the rice and dal mixture and stir-fry for 2-3 minutes. Pour in the water, mix in three-fourth of the fried nut, coconut and raisin mixture. If you are using fresh peas, add them now. Pressure cook for one whistle.
6. If you are using frozen peas, add them as soon as you are able to open the pressure cooker without leaving out too much steam and then close the lid of the cooker and let it sit for another 5-8 minutes.
7. Before serving, stir in the salt and 2 tbsp of butter or ghee.

8. Garnish the top with the remaining nut mixture and coriander.
Posted by Manaswini at 7:53 PM